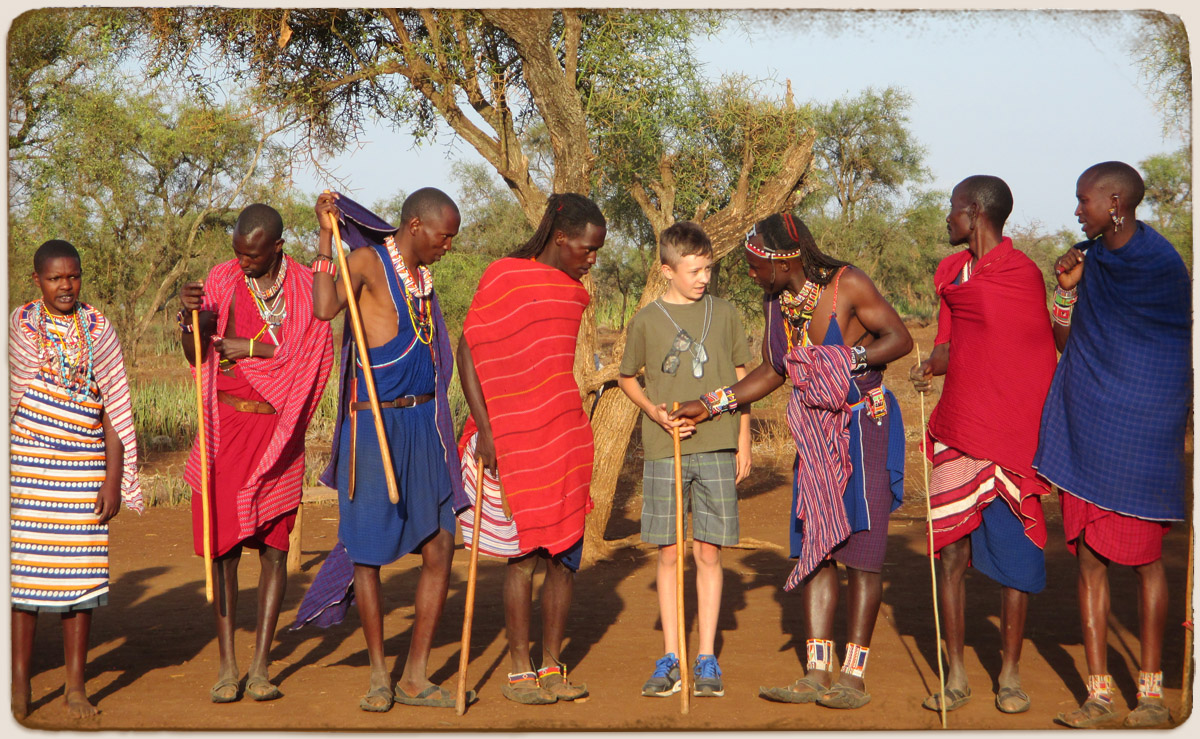 Writings from a young adventurer 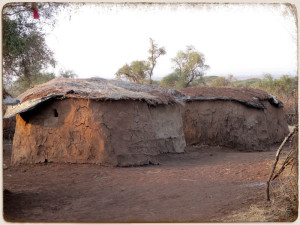 In the barren sun-drenched plains of southern Kenya lie small dirt huts all lying in a circle. From far away it might not look like much, but as you get closer you notice small details that you missed, such as the thorn acacia (Whispering Thorn Acacia is a type of tree that belongs to the Acacia family and has long bristling thorns) surrounding the village with only a few entrances which is used to keep all the wild animals away from the precious cows and goats, the little children wearing Santa sweaters as they chase each other around with smiles stretching from one side of their face to the other, or all the woman wearing their traditional red robes, all talking while they work on the village wares. If you keep looking onwards past the village you will see the teenagers looking after the families’ large amount of cows and straining their eyes so they might see the lions, cheetah and leopards that are stalking their only livelihood. As you enter their smoke drenched huts, bending a little bit as you enter, you notice the small collection of personal effects, a rusty cooking pot over the smoke inducing fire, the small collection of furs hanging above the small children’s bed in a corner ready to be used as blankets as the Maasai people sleep on old cowhide during the cold nights. As you are leaving your guide tells you to turn around and out of the blue, everyone who lives in the village is coming out to give you a good bye song, wishing that you will come back soon. 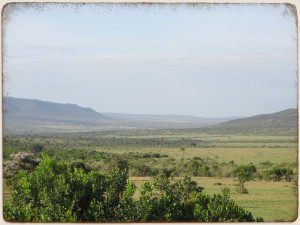 After driving a long time in a jeep along the typical washboard Kenyan road and you come to a paved road you almost faint with the relief of not bouncing up in the air with every big bump you hit. Then half an hour later you reach the trucking road and what was once nice lung refreshing air becomes full of noxious fumes being spitted out of 3rd generation trucks in big black clouds of poison. Then in the distance you notice a big steep wall of dirt and grass, but as you look up from the bottom wondering how in the world you will reach the top, you see a black line of smoke leading up the side of the valley. As you our halfway up you make the wrong choice to look across the road and down the side of the cliff. After that every old truck you see flying by you worry that it is going to go over the side when its brakes stop working. Around the middle of the valley’s side there is a little indent and there our guide, Anthony, tells us that the church which is tall and white and absolutely beautiful was built by Italian P.O.W during the 2nd World War. They also made the roads which we have been driving on, then all of a sudden you appreciate this road and its landscape for what it really is, a place that time can never change.

When you get into the jeep just after the crack of dawn, when the sun is just finishing showing its colours, you hear the birds in the forest around you start to come to life. As you get out of the hills you come to the prettiest valley you will ever see with a winding stream slowly making its way through the middle of the valley forming smooth rocks that are inviting you to come sun bath on them – and you would if not for the family of lions that have stolen the nice warm rocks. A few hundred feet away you see the hordes of zebras that are lining the valley. The one thing that slightly ruins this paradise is that of the bones and the vultures and storks clawing at the mound of a dead animal. It is in the Maasai Mara that you realize that life really is the survival of the fittest. You see this in the claw-marks on a nearby zebra, the old wildebeest that had been left behind by its herd and the eyes of lions relaxing in the bushes after just getting filled up on last night’s animal. 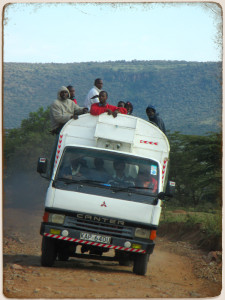 The bustling city of Nairobi cannot be compared to any other city of 4 million inhabitants, from the high-rises that seem to reach the moon compared to all the other buildings that you have seen during your trip. It is very interesting driving in the city because the traffic is horrendous, traffic lights are just a suggestion and people suddenly swerve in front of you without a warning or lights. When you are driving you are in the city and at one minute you could be in the rich compounds with the razor coil at the top of the brick wall, then you are driving past the slums with the dirt and metal tin roofs then the next you are in the nice clean city downtown with the presidential house and the tall nice looking high-rises. Just a few minutes away from the 5 star hotels are goats eating from piles of garbage and plastics. Apart from the traffic and the garbage there is a lot of wildlife such as lizards and the trees full of 5 foot tall Marabou storks, as well as the cows, goats and domesticated dogs that spend the days wandering the hillside.

Joseph is an African man who resides in the Nakuru region of Kenya, He has lost all feeling in both of his legs and he walks with crutches. His occupation is that of an artist where he draws postcards to sell to all the guests that stay at the hotel where he works. He was also quite passionate about Christianity as he wore a large silver cross and many of his drawings pictured angels blessing the animals and the people of Kenya. One of the things that he was proud of was his son who was training out of the country to become a doctor. Although he was not living as a rich man he felt that he was blessed to live in such a beautiful part of the world.

Mark is an African man from Tanzania who moved to southern Kenya after Tanganyika became Tanzania. His family lives in south western Kenya while he moved to south eastern Kenya for a job. He found a job as the manager of the Amboseli Sopa Lodge near the base of Kilimanjaro. He enjoys spending time with the monkeys that live in the trees around the hotel. And after everybody is finishing their meal he personally comes by and asks them about their day and their meal and how they are feeling. He is also quite passionate about school and believes that everybody should go to school and that is one of the reasons he moved away from his family so he could earn enough to send his children to school.

Sammy is a tall Maasai warrior who lives in the Kilimanjaro area of Kenya. He has one brother named lagopo. Sammy stands at 6.4″. He has long braided black hair stretching down to the middle of his back; he wears the traditional red robes of the Maasai and also carries an elegantly carved walking stick. His ears are pierced and expanded and he then has colorful beads in them. He believes in all his Maasai traditions however, he also believes that all of the Maasai children should have the ability to go to school. He then tells us about the school that stands 100 metres away, built by the Kenyan government for the local Maasai government.

The Maasai tribe eat mostly berries and goats. When the young boys take the cows away to find water for them they bring two mules with carriers filled with food, and when the food runs out they mostly survive off cows milk which is very healthy because the cows eat only organic pure grass and leaves. The Maasai tribes raise their cattle only to sell or to eat them. 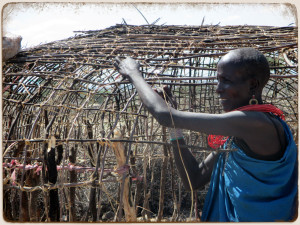 They build their huts in a circular shape. Each wife has her own hut which is circular and stands at about 1.5 meters tall. The process of making a shelter starts after the men collect the building supplies. The women start by putting large branches as a casting. Then they mix cow dung and dirt and place it around the sticks and it hardens into a crust like substance. They then do the same to the roof. After that they add dried grass to the roof. The Maasai use their huts to cook, sleep and to store their possessions.

The terrain around the Maasai villages is flat and although they are nomadic they don’t have any cars. Only a few of them have bikes and even less have motorbikes. Almost everyday the Maasai people walk their cows & goats many kilometers to find greener grass and after spending a few hours they walk back and do it all over again in a day or two 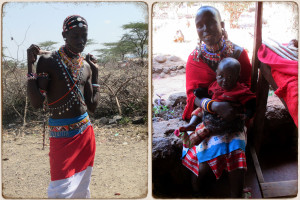 The Maasai people wore red sheets tied off in a robe fashion and one of the reasons that the colour is red is because that colour scares away lions which would hurt or kill their cows. The Maasai men grow their hair long and tie it off in dreadlocks while the woman tightly braid their hair. Both male and female have pierced ears and in many cases expanded their earlobes into which they then put brightly coloured beads.

—Written by Elliot Salter, of the Whistler Waldorf School